I feel so terrible that it's been so long since I've posted!!! I tried to write something last weekend, but I just got so busy GETTING MY WOHELO and stuff. It was such an awesome ceremony! An awesome week, really.
Monday night we picked up Nate at the airport and got a room at the hotel right outside the parking lot. But since Nate had been sitting down for five hours, he wasn't really interested in going to bed right away. So we went hunting for Cosmo's, this really cool coffeehouse. The best part was that they had an amazing GF menu!! (Gluten-Free) I'm not GF, but my mom and Leo are. We hung out with our snacks playing scrabble for a few hours and it was really nice. Then we went back to the room and watched those really stupid prank'd shows that MTV shows really late at night til almost 2:00am.
Tuesday we headed back home. Mom tried letting Nate drive, but living in Cali has turned him into a CRAZY driver!!! (Sorry Nate, if you're reading this, but it's true) So I drove the rest of the way. Once we got home, we took Nate to Dan's for dinner. You'd think this tiny town wouldn't have anything going for it, but it has got same delicious restaurants. Dan's is this amazing steakhouse, and we always get the same thing because their steak is sooo good. Except Leo, he doesn't like steak, so he gets a burger. After dinner we gave Nate the not so grand tour of our tiny town and stopped at our, admittedly, awesome park. We all played around for awhile and Nate got Leo to drop feet first into a giant mud puddle. It was pretty hilarious.
Wednesday I had to work, that was pretty much the only reason we bothered coming back home instead of staying in town. So I went and did my thing, no big. We just kind of used Wednesday to get used to each other again. It was really nice that Nate and I weren't down each others throats like the last time we were together in the same state. Hopefully that means we can be friends or something instead of those siblings that are always fighting. Maybe. That gives me hope for Leo, maybe someday down the road we won't feel like spiting each other for fun.
Thursday was mom and dads fifteenth anniversary, but they didn't get to see each other until late! Dad had to work and we left for town in the morning. We got to town in the early afternoon and went around running all the errands that needed running. We got Nate some dress shoes(really they were just nice sneakers, but they fit their purpose) we got Leo new shoes, mom got some new shoes. Everybody but me :( I'll live, lol. The majority of the afternoon was spent looking for the perfect gifts for my fellow Camp Fire seniors and Hope's WoHeLo gift! And we got a few other things, but I can't remember what they were. We went to mom and dad's friend's house for the night, which was nice. They have a son Nate's age who lives next door and they went and hung out for the evening. Their other son, that lives with them, is Leo's best friend, so he was occupied all night. I just popped in a Redbox and then went to bed.
Friday mom and I split off from the boys and went to run the last last minute errands. For instance, mom needed nail supplies. Stuff like that. We couldn't check in to the hotel until 2:00pm, so we had a ton of time to kill. Sooooo, we went to Incredible Pizza! Incredible Pizza is like this pizza buffet(that makes GF pizza to order, no extra charge) that has a huge arcade! And they have daily deals you can get, like get $20 on a card and get a $10 bonus! So that's what we did. And let me tell you, we had a blast! Now, I play for tickets, so I ended up getting somewhere around 492. Since I'm not so into the prize counter, I just gave mine to my mom. She's got an account and she always saves her tickets. I don't know what she's going to spend them on, but she saves em! After we'd all had our fill of fun, we went and checked in to our hotel. We stayed at the Holiday Inn Express right in the middle of town, so nothing was more than 20 minutes away! My father and Lisa got to town around 7:00pm, it was so fantastic to see them! It felt like Bennett and Winston hadn't changed at all! I helped them unpack and everything and we just chilled for a little while. then they were getting hungry, so I suggested we all go out to Village Inn!

Hope you had a great St. Patrick's Day! 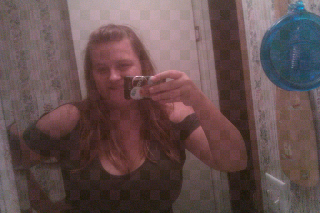 Not much to say, honestly haven't been doing much! But! I have sent out almost all my invitations to my WoHeLo and I finally have copies of the WoHeLo pictures we took last week with the camp fire office photographer! 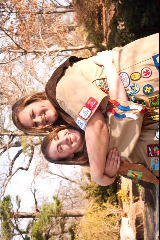 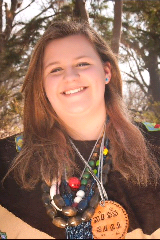 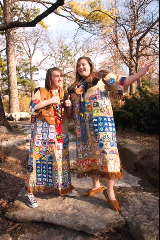 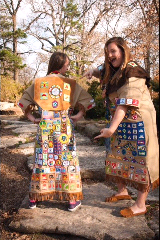 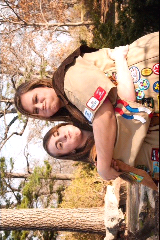 Hey everybody, my friend JJ is super close to winning this dream prom package! All you have to do is like her picture here! I swear it's not a scam!
Posted by Razzi at 11:03:00 AM 0 comments

Email ThisBlogThis!Share to TwitterShare to FacebookShare to Pinterest
Labels: helping out a friend

Okay, so I'm feeling kind of fired up. First off, real quick, I finished my WoHeLo!!! Got it all done signed sealed and approved!
So I just finished watching a bunch of video's about KONY2012. I watched some from both sides. The people advocating for it and against. If you don't know who Joseph Kony is, go to KONY2012.com and watch their very informative video. In short, he's an evil old man in Uganda on the top of the international most wanted list. His charges against humanity are numerous and horrific. The kony2012 campaign is trying to make Kony a household name. As famous and talked about as Taylor Swift or Justin Bieber, Not to celebrate him, but to let our government know that the people are still interested in Uganda's children's welfare.
There are people who think it's all a load of crap. They believe that Invisible Children (the company that organized the campaign) is scamming the nation. That like all those other social media campaigns, it doesn't work. You know the one's, "if Joe's picture get's 1,000,000,000 likes the doctors will waive his sons medical fees" and other such nonsense. But I think all these people are completely missing the point.
KONY2012 isn't about getting we, US civilian citizens, over to Uganda to fight the good fight. It's to spread awareness! If the videos and stickers and bracelets and posters get people talking about it, then it's working. And isn't that what social media was made for? KONY2012 is a worthwhile cause. Because we have a voice! If I've learned anything from being in Camp Fire, it's that just because I'm one person or I'm only 17 doesn't mean I can't make a difference! Have you ever read that Dr. Seuss book, "Horton Hears a Who"? It's like in that, where everyone is yelling except one little boy. And no one can hear them until that one boy raises his voice!
The goal is to have Kony arrested before the end of 2012. They believe that we must strike while the iron is hot. KONY2012 can't be some fad that we pick up to play with and put down again. Opinions? 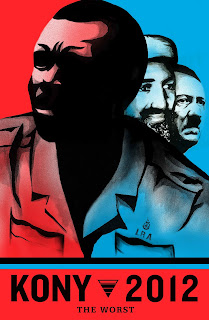 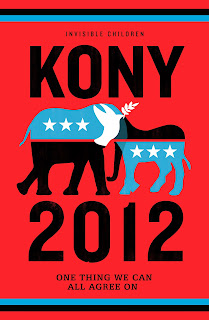 Let me know, I genuinely want to hear some different views!
Posted by Razzi at 8:44:00 PM 3 comments

Hey guys,
How's everyone been? I've been frantically trying to find a chaperone/roommate for my conference in DC, but it's either inconvenient time or too much money for everyone. I'm going to ask the women at my board meeting this Monday, but if no one there is able, I'm prepared to just give up on it. It was never supposed to be this big of a deal. I'll have to re-write my walk in speech and send a new one to Susan. But that's the easy part. I'm just bummed because I was so excited for my first solo vacation. No parents. Not like I was going to o crazy or anything, but I'd really like for my first few weeks at college to not  be the first time I'm on my own for more than two nights!
I guess if I don't go to DC though, I can get this dress I've been eying. It would be perfect to wear for my WoHeLo. It would fit under my ceremonial attire, and look fabulous for pictures and the party. It's got a purple ruffled top and a simple black skirt. There was another one I saw too, but mom didn't feel too good about it. And I kind of want to find some super short black shorts to wear under this one dress I have. I just got these awesome tights to wear with it, but it still needs shorts, just to be sure ;-)
Mom left for town early to spend time with her sister and then her friends. I would've gone, but I had to work yesterday, today, and tomorrow. But it works out since daddy has to be in town Monday morning anyway, we're leaving right after work tomorrow. So get up, go to church, go home and pack, go to work, go to town. We probably won't get in until around midnight, but daddy seems to be okay with it. I don't know where we'll all sleep. The place we usually stay is really uncomfortable for four people. three, sure. But unless I'm sharing the couch bed with Leo, I'm not seeing this working out. Maybe he'll sleepover at his friends house or something. Seems kind of late though. And all his friend has school.
I just finished catching up on The Vampire Diaries.  I watch all my shows on Hulu. I can't decide if I prefer the books or the show. The show is definitely more "people pleasing". What I mean is, the producers give the audience exactly what we want. But aside from the names, we might as well be in a different story. Nothing happens the same. Caroline is a real person in the show, with feelings and stuff. Then she gets turned into a vampire. I'm fairly sure that NEVER happened. And so far there is no sign of Elena getting her wings powers. She never got turned into a vampire and then brought back. So frustrating. Why couldn't they do both as tv shows and name the other one something else?
Right now, I'm charging my flipcam to take to town. I might try a little vlog or something. Could be cool. What do you guys think?
Time to catch up on my beauty sleep, that's all for now folks.
Posted by Razzi at 9:18:00 PM 0 comments

If you were wondering, this is what I wear for my WoHeLo! I literally finished it today! 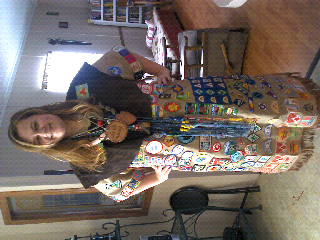 Razzi
Hey, I'm living my life the best I can. I live by two mottos; the first being kill them with kindness. If you don't like someone, kill them with kindness, you'll come out the better person every time. And the other is just the Golden Rule. Pretty simple. I still screw up, but I always apologize and try to make amends.